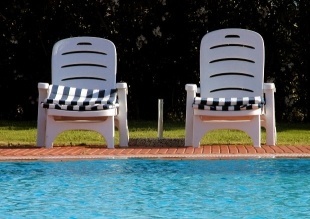 When our neighbor said he had installed a solar cover on his family swimming pool, I must admit, my first thought was “what the heck is that?” I had known about pool covers, but throwing in the word solar to the mix threw me off for a bit. My husband Ed laughed, because he knew what would happen next – I did some research on the subject. Before long, we had our own solar pool cover. So what did I find out?

What exactly is a solar pool cover? My initial vision was of some expensive and complicated rolling cover that somehow had solar panels in it. Boy was I wrong – the reality is much simpler, and very effective. They’re sometimes called solar blankets, and look like a giant sheet of bubble wrap laying on top of your pool. The bubbles trap heat from the sun, and transmit that heat to the water, keeping the temperature nice and warm.  What a great concept, and a wonderful way to save on heating costs for the pool.

How does the solar pool cover help? From my viewpoint, the first advantage of the solar cover is the simplicity. It actually just floats free on top of the pool – so it’s not like you have to tie it down or anchor it. It works just like putting a lid on a pot while cooking on the stove – it just holds in heat. When the sun goes down, the night time cool air doesn’t rob the pool of heat like it would if unprotected. The solar pool cover traps the heat that was absorbed during the day and doesn’t let it escape. What an excellent idea! I was impressed, could see the benefits, and that’s why shortly after I did my homework Ed and I went out and bought our own solar pool cover.

How easy is it to set up? To lay the pool cover on the pool is about as complicated as putting a comforter on the bed. You just roll it out and spread it. It then floats on the pool and there is not really anything else to do. I wondered about the pool cover flying in the wind, but it hasn’t happened for us. Something about the bubble wrap makes it sort of stick to the water, so it never comes out of the water.

Now taking it off and putting it up – I admit, that job is a little sloppy, and Ed and I had a bit of a learning curve on this part. The theory is just to roll it up and store it – but imagine that the comforter for the bed is very large and soaking wet – it’s not very user friendly and a bit of a chore. So now I’m investigating a solar pool cover reel, and Ed is all for that!

Energy savings – really? I think I’m seeing our energy bills drop slightly, but it’s hard to isolate the savings brought on by just the solar pool cover. But what I’ve been told is that the solar pool cover can increase water temperature by as much as 10 to 15 degrees. I do know that having the cover has allowed us to extend our swim season – by using natural heat retention, we don’t have to run the pool heater as much to keep the water at a nice, warm temperature.

I wasn’t sure what we were getting into when I started researching a solar swimming pool cover, but I was impressed both by the concept, and how that simple tool – a water blanket – has helped keep our pool warm. If it improves our energy efficiency, then I smile more often when the kids are out splashing around in the pool.

Becky Flanigan writes freelance for Pool Center. She has 3 kids with her wonderful husband – two boys and a girl – and two lovely golden retrievers.  When she’s with her family, she spends many happy hours at their swimming pool, watching the kids and dogs splash and play. Follow her @Becky_Flanigan

Conserve Water with a Dual-Flush Toilet

Benefits of Using a Self Composting Toilet