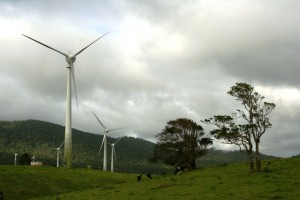 Renewable energy encompasses solar energy, wind energy, and geothermal energy.  It is energy that is available in nature for free than can be used to power homes, buildings and mechanical equipment.  Following is a list of the most common renewable energy sources

Solar Energy:  Solar energy is harvested and converted into electricity through the use of a photovoltaic (PV) system.  A PV system uses panels that convert sunlight into electricity and consists of several solar panels, a controller or power converter, an inverter, several batteries to store energy and other components.

A solar panel is made up of several photovoltaic cells that are used to generate and supply electricity for commercial and residential buildings. Each panel is rated by its direct current (DC) output power and typically ranges from 100 to 450 watts.

The heat pump takes advantage of the relatively constant temperature in the ground (55 °F) that works as either a heat source or a heat sink.  Pipes are buried in the ground, which carry either a refrigerant or water, to transfer energy between the earth and the heat pump.  The pipes are arranged either in a horizontal or vertical arrangement and can reach depths of 250 feet.

Non renewable energy sources are natural resources which cannot be produced, and once they depleted, will no longer be available.  Some of the most common used sources are fossil fuels like coal, diesel oil and natural gas.  Fossil fuels are used in power plants as energy used to power a turbine that generates electricity.  The combustion process of burning these fossil fuels generates carbon gas emissions that are harmful to the atmosphere and increase global warming.

Diesel: Diesel can be used in diesel generators to produce electricity and in vehicles for fuel.  Although burning diesel is not as toxic to the atmosphere as burning coal, it is still more harmful than burning natural gas.

Natural Gas:  Natural gas is used for electricity generation with the use of gas turbines.  Burning natural gas to produce electricity is cleaner than other fossil fuels and has lower carbon emissions than burning petroleum or coal.

Advantages and Disadvantages of Geothermal Energy