Benefits of Driving a Green or Eco-Friendly Car 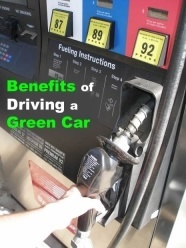 What is an Eco-Friendly Car?
An eco-friendly car is one that runs either totally or partially on alternative fuels. This can include electricity, natural gas or another fuel source. These cars are usually of two types: either a true alternative-fuel vehicle that has no need for gasoline or a hybrid that uses a combination of gasoline and alternative fuels.

Fewer Emissions
One of the biggest benefits of an eco-friendly car is that it produces fewer harmful emissions than regular cars. Electric cars produce virtually no emissions, while cars that run on compressed natural gas have much lower emissions than cars that run on gasoline. This means fewer hydro carbons released into the atmosphere, which cuts down on smog conditions in certain areas.

Less Reliance on Gasoline
Both electric cars and those that run on natural gas have no need for gasoline, while gas-electric hybrids get about twice the gas mileage of regular cars, which greatly reduces the amount of gasoline needed. Using less gasoline has the benefit of being less dependent on foreign sources of oil and reducing environmental contamination from oil extraction, spills and the gasoline refining process.

Saving money
Though eco-friendly cars usually cost more to buy than regular cars, they can bring big savings in the long run. Gas-electric hybrids usually run a few thousand dollars more than their gas-guzzling counterparts, but because they get double the miles per gallon, they can start saving their owner money after a few years, depending on how much he or she drives. The process to convert a car to run on compressed natural gas usually costs around $8,000 as of this writing, but a gallon equivalent of CNG is about $2 less than a gallon of gasoline, and both models get similar gas mileage.

Tax Breaks
The federal government and some states offer tax credits and deductions for driving green vehicles, which will further reduce the cost of buying such a vehicle and make it more likely you will save money in the long run.

Intangible Benefits
Another benefit of driving an eco-friendly cars is knowing that you are doing something to help the environment.  An intangible benefit of being an owner is that you are setting an example for other people.  The more people that buy green cars, the more likely that car makers are going to spend money on R&D for the production of such cars.  This will lead to better alternatives and better performances for  alternative fuel cars worldwide.

Being More Eco-Friendly at Home

Tips on Being Eco-Friendly at Home