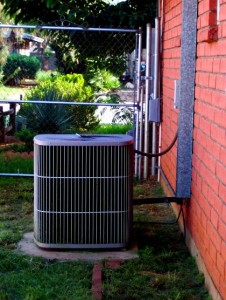 Window air conditioners are the most inexpensive air conditioning alternative to cool a room.  The advantages of them are that they are a lot easier to install and a lot more inexpensive to buy.  You would have to get several of these for your home to replace a central air conditioning system, but they would still be cheaper.  They tend to be most energy inefficient and have much lower cooling capacities.  Maintenance requirements would also have a homeowner changing several air filters a year, instead of just one with a central air conditioner.  Nevertheless, the Energy Star website has a list of the more efficient windows units.

The American Recovery and Reinvestment Act of 2009 introduced energy efficiency tax credits that included central air conditioners.  To qualify, package central air-conditioning systems must have an EER greater than 12 or an SEER greater than 14 for a federal tax credit of $300.  Unfortunately, federal tax credits for energy efficient air conditioners expired on December 31, 2011 and have not been renewed for 2012.  It is possible that they can be re-instated in the future, but as of now, no new legislation has been passed.  But you can still get a 30% federal tax credit for using geothermal heat pumps.

Advantages and Disadvantages of Solar Energy