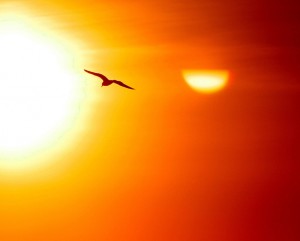 Solar thermal energy is a technology that harvests solar energy to use as heat.  The sun’s radiation is converted to heat by using solar collectors, and that heat is then transferred to water.  Solar thermal systems are used domestically and commercially to heat hot water used in cooking, showers, faucets, laundry and process heat.  They are the clean-energy equivalent to gas-fueled water heaters.

There are many advantages to using solar thermal energy: inexpensive or free water heating, environmental friendliness, very low maintenance, use of renewable energy, the government will help you pay for them, and using solar water heating has 4 to 5 times the energy effectiveness of using photovoltaic (PV) panels at a fraction of the cost. Comparing them to solar PV systems, solar thermal systems are more energy efficient and cost  less so the return on investment is better.

The two major disadvantages of solar thermal energy are the heating inconsistency due to the seasonal variation of solar radiation, and the higher initial cost over traditional gas-fueled and electric water heaters.