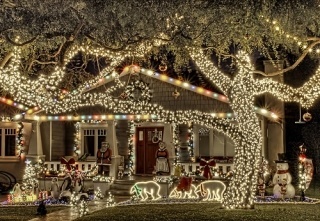 It’s hard to imagine a Christmas wiring décor without the complicated and tangled wiring, which is difficult to set up without the assistance of a professional. If this is the case with you, do not fret because you are not the only one finding yourself at odds with the unsightly extension cords or the hefty electricity bills. Almost all of us who have tried a hand at lavish Christmas lighting know that it is not an easy task to accomplish.

Like all solar lights, Christmas solar lights convert energy from the sun into usable electricity that illuminates the LED’s. The battery is charged using the sunlight’s energy during the day, which is then converted into light during the night.

The solar panel consists of photovoltaic cells (PV cells) which collect and convert the energy of the sun into electric current. When the sun shines, the semiconductors inside the cell absorb the energy. This energy causes a loss of electrons which flow and constitute current. This flow of current provides the electricity required to power the LED bulbs.

A photo resistor stops production of electricity after the battery has fully charged or when the night falls. This photo resistor detects darkness and sends signals to the controller board to switch on the LEDs. The controller board does this by prompting the electron current from the PV cell to send electricity into the cord that contains the LEDs.

The only thing that may deter you from buying solar powered Christmas lights is their cost, however, when used over a period of time, solar lights more than compensate for their high initial cost by saving you the cost of electricity. The LED bulbs last for 100,000 hours, against 3,000 hours of an incandescent bulb, and they do not require the use of conventional electricity.

Win the War Against Energy Sucking Devices In Your Home

The Low Down on Low Energy Low Cost Lighting

Energy Saving Tips for the Home