Waterless Urinals: How Do They Work? 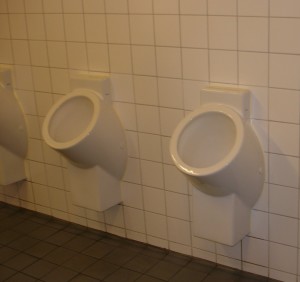 Waterless urinals work by using chemicals to control odor.  Urine flows through the urinal drain, past a strainer that catches debris, and into a storage system that prevents odor from escaping into the room. The urine passes through an oil-based fluid, which acts as a sealing liquid to block odor, and the urine is then collected in a waste deposit below. Because urine is denser than oil, the urine sinks through the oil, which floats on top of the urine layer.  Odor is trapped below the oil layer and the fumes are not exposed to bathroom occupants.

Sloan, Kohler, and Zurn: Quick review of which brand is best.

Sloan, Kohler and Zurn are three very popular brands for waterless urinals.  Aesthetically, I prefer the modern look of the Kohler urinals over the Sloan and Zurn urinals. Functionality-wise, they are all pretty much the same.  When choosing one, it will be a matter of which one looks better for you.  Kohler waterless urinals tend to be the more expensive ones and Zurn urinals tend to be the least expensive.

Pros and cons of waterless urinals

The biggest pro of waterless urinals is obviously that they do not use water.  You will be doing Mother Nature a favor by using them.  You will also save money from the thousands of gallons of water a year that you save from not flushing.  The only required cost for waterless urinals is changing a $10 filter once a year.  There is also no need to maintain plumbing pipes and the potential blockage of them.  Furthermore, waterless urinals are more hygienic since there are no valves to touch to flush.

The cons of waterless urinals are that the cartridges can be messy to change, and odors can be created at their time of replacement.  Waterless urinals also splash more than standard urinals because there is no water to absorb the impact of the urine as it hits the urinal walls.